Motivation is like water; we cannot live without it. Hi Eric! „How much do you wish to succeed!”, one might say. I just saw...

Motivation is like water; we cannot live without it.

Hi Eric! „How much do you wish to succeed!”, one might say. I just saw your performance here in Krakow recently in front of 10,000 people, where do you get so much energy from?

Thank you, I simply believe in what I do with all my soul. I came here, to give you all a proverbial “kick” that you need in order to act, because all of us need some sort of motivation. Even a nation, such as yours, which has been invaded and put through so much war. Motivation is like water; we cannot live without it. 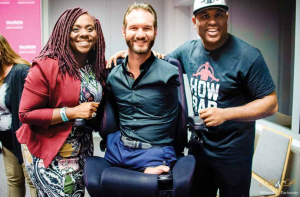 Thank you Eric, what you say makes a lot of sense. Unfortunately, the current atmosphere in our country is not at its best. Motivation has become something that is seen as almost artificial, something that just vanishes shortly after it has appeared, while the person remains exactly where they were before. Personally, I disagree with this, but those are the opinions currently present.

Everyone is entitled to having their own opinion. The thing that makes my presentations unique is the fact that I am speaking from the heart. I do not fear transparency. I don’t mind speaking about my family or my fears. I am unafraid to stand before the world and tell them my story. From my work with underprivileged youths, I have learned that nothing is as much of a force influencing change as personal experiences. No one will make any changes in their lives if they don’t feel the need to do so; in other words, if they don’t have any motivation to do so. If you don’t have impulse to do something in your heart, then why would you do it? There is no other option, you will not budge. This is why I believe that motivation is the foundation of life, and something, which cannot be lived without.

Your story is the best example there is of how important motivation is. How did it go?

The painful turning point of my life was started by the “neighborhood rumors” regarding my family, as well as an honest question directed to my mother intended to verify the validity of these rumors; “Mom is dad really my dad?”. As an answer, I got a very short “No”, which continued to echo in my mind for years to come. I was a teenager at the time, and it completely broke me to hear this. I didn’t know how to deal with the emotions, so I started causing trouble both at school and at home. One day, during a fight with my parents, I said that I was moving out, which was countered with them stating, “Just know that, if you walk out that door, there is no coming back into this house.” I closed the door behind me…So began a new chapter in my life, full of loneliness, homelessness and hopelessness, which also included dropping out of school and sacrificing my dreams of playing football. Back then, I truly believed that all these misfortunes befell me – foremost being homeless – simply because I was convinced that my mother did not want me and my birth was just some senseless “accident”.  Today, I convince people to be numb to such things, and to strive to be open with their loved ones and unafraid to tell them how it is, even if the truth is hard to bare. 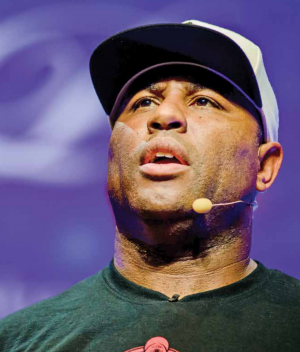 I know this story well and I know you did not give up. What happened next?

Finding food in dumpsters and stealing from stores motivated purely by hunger – this for me was rock bottom, a level where I could not sink any lower. The only direction left to go was back up. At that early age, I realized that by “playing the blame game” in order to place responsibility on others for my fate, I am only hurting myself. Quickly, I discovered that I could heave through the suffering and place the blame squarely on myself. Then, something really “clicked”! I realized that I caused myself to be in this situation and only I could get myself back out of it. Pain is temporary, it may last; a minute, an hour, a day or even a year, but in the end it, goes away and something else takes up its place. But if I surrender to the pain, then it will go on indefinitely.

From what I understand, in the end, you ended up going to college. How did that come about?

My fate started to change when I made up my mind to take it in my own hands. The right people started crossing my path, and the situation started looking more promising. From that moment, I decided that I will live by this cardinal rule; “I want to be a part of something good”. This was the moment in which I decided that I wished to continue my education once again. Of course, at that time, it hadn’t even crossed my mind that I would one day become a motivational speaker…It was only during my time in college when, by accident, I completely came to realizing what my calling in life would truly be. I became fascinated with the workings of a group of young African Americans – something of a “brotherhood”. In addition, they seemed to be emanating a “positive aura”, which is why I immediately started collaborating with them; creating new programs and performances. One day, one of them did not show up for a performance in which he was the lead. At that moment, I felt that I could easily take the place of the absent speaker. My first presentation was received with such enthusiasm that I instantly felt that same passion, which accompanied me as a child when I was playing football. In that instant, at the age of 19, I convinced myself what it was that I was put on this earth for, and what a gift I have to give the world. Being on stage, I felt like some kind of superman, like a super hero. This is how this talent was born. To this day, my performances are accompanied by this thought: “If you wish to succeed as much as you wish to breath, you will make it – there is no other way. How much do you want to succeed?”

Thank you so much, Eric, for telling us this incredible story. It will surely prove a great inspiration to our readers.